Data in the time of Covid-19

Written by Grace Annan-Callcott, in collaboration with Natalie Banner and Tom Harrison.

Data has been critical in the response to Covid-19. From informing government advice on who needs to shield, to understanding how Covid-19 affects different groups and deciding on public health measures based on the now infamous 'R' number. Health data is at the centre of public debate about the pandemic.

To meet the urgent need created by the pandemic for access to accurate, timely data, NHS organisations have rapidly formed new partnerships. These partnerships have given third-party organisations - including  academics and private companies - access to NHS-held data, to help assess and analyse the spread of Covid-19.

Although developed in a period of crisis, the infrastructures, partnerships and new norms established now could be with us for a long time. As we start to emerge from the initial emergency, it's important to consider the impact of these decisions on the future of health data in the UK.

Where next for NHS health data partnerships?

At the start of March, Understanding Patient Data published research into what the public thinks about NHS health data partnerships. The pandemic has raised new challenges and questions, but much of what we learned from that research still stands - and is actually more important than ever. 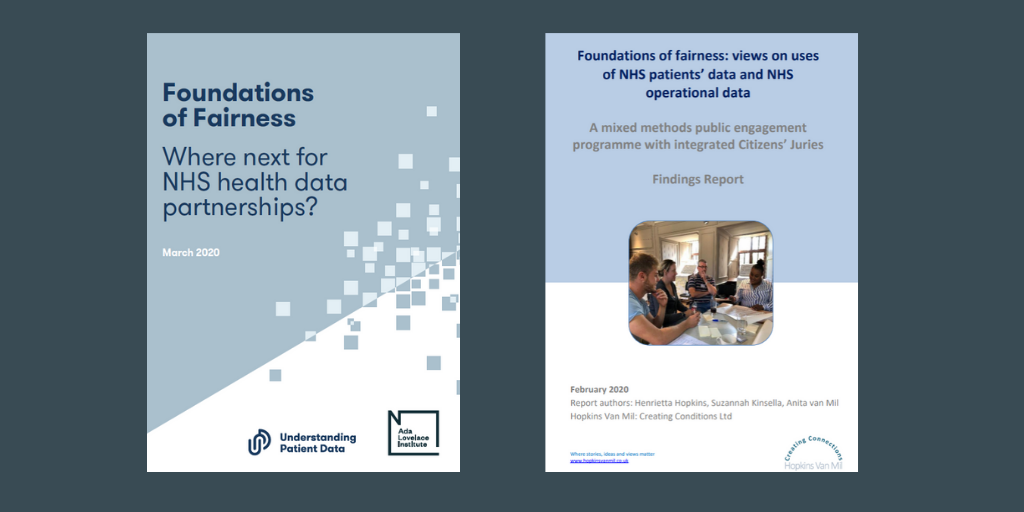 1. Public benefit must be the main aim

People will only support third-party access to NHS data if the aim is to provide a clear benefit for patients and the health service.

‘Public benefit’ is not easy to define though - and it's something we’re working with the National Data Guardian to explore further. It’s important to firstly acknowledge that data is not neutral. Decisions about what data to collect and what problems to address with it are all value-laden. They’re decisions made by people and influenced by their biases.

The ‘public’ is also not one homogenous group. What benefits some groups, might have a negative impact on others. This is especially important right now, when data about people worst affected by Covid-19 is sometimes inaccurate, incomplete or just not collected at all. For example, it's clear that people from minority ethnic groups are dying from Covid-19 at a disproportionate rate. But data on ethnicity is often missing from health records: the OpenSAFELY study of 17 million records found that 26.4% were missing a label for ethnicity. There are also far too many gaps in data about people who receive social care.

Understanding and addressing these gaps in data - in partnership with the people affected - will be critical to designing policy and delivering care that improves health inequalities and truly benefits ‘the public’. 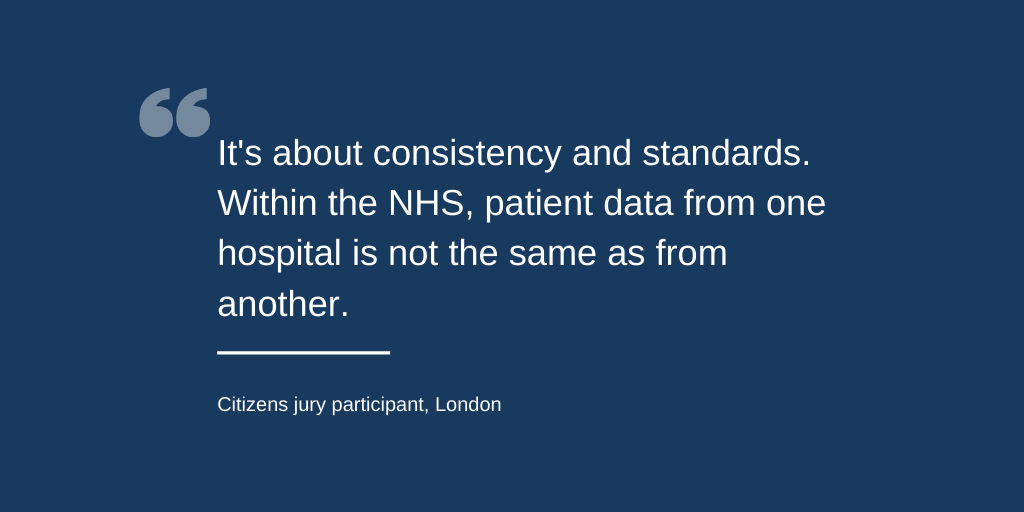 2. People want to have a say

Since then, the importance of effective and responsible use of health data has been discussed in public in a way that’s never happened before. Slides and graphs that draw on health data are shown in every daily press briefing. And decisions about how to use data (and the quality of that data) are having an impact on people’s lives in a very real way. There’s public debate about trade offs, benefits and risks that wasn’t previously possible. The criticism of the shielding letters sent out in March is perhaps the best example of this.

We must make the most of this interest to involve people in decisions about the role data and technology should play in healthcare. That may mean being imaginative, and developing new models and standards for public engagement that can be set nationally and delivered locally.

One idea we’ve been thinking about is ‘learning governance’. Instead of a one-off panel or focus group at the start of a project to explore public views, organisations would set up ongoing public engagement. Teams or organisations could try new things and ask members of the public what they think, using the feedback to improve the approach based on people’s views. Keep a lookout for more detail on this from Natalie soon. 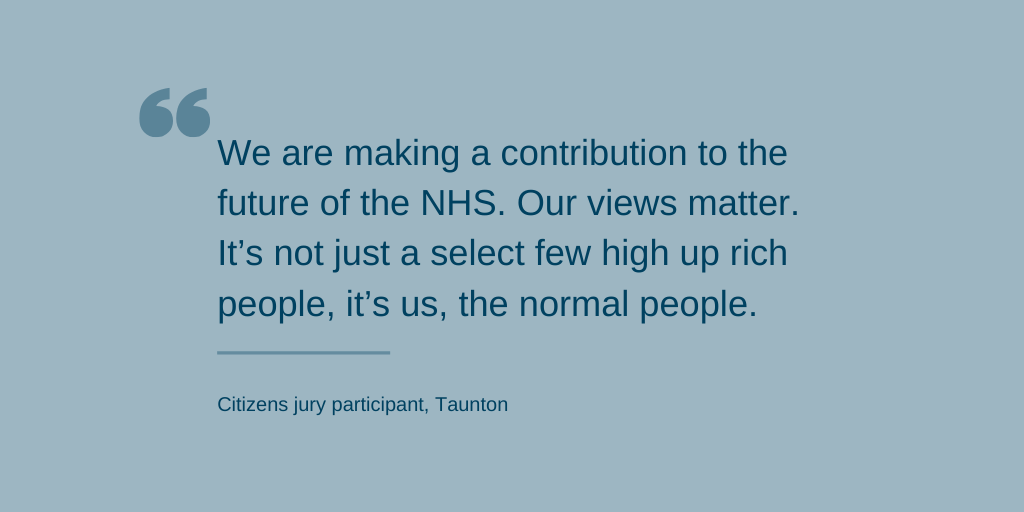 3. Transparency is more important than ever

Transparency is more important than ever right now, especially as misinformation about the pandemic is common. The NHSX datastore is a good example of where this has been lacking, despite the best intentions of the teams working on it. The datastore centralises data from a range of NHS sources to help decision-makers understand how Covid-19 is spreading and prioritise resources. NHSX has worked with a number of private companies including Palantir, Faculty, Microsoft, Google and Amazon Web Services to build the datastore. Despite committing to transparency and openness at the outset, the Data Protection Impact Assessment (DPIA) and contracts were only just published - and only under threat of legal action. This undermines trust and gives the impression that there’s something to hide. It was a missed opportunity to be open and honest - and demonstrate trustworthiness. 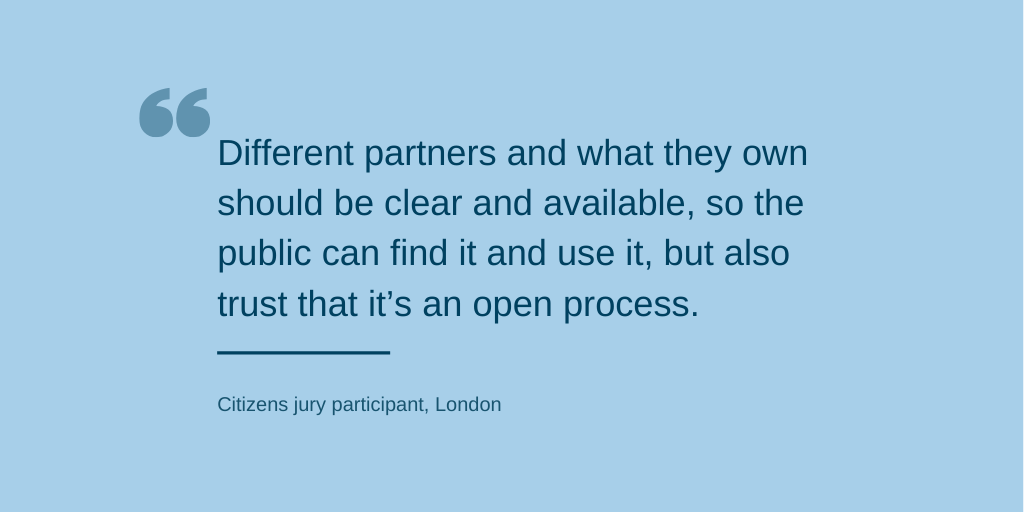 Meaningful transparency doesn’t mean telling people what’s happened after it’s happened. It also doesn’t mean waiting for Freedom of Information requests (FOIs) or legal action. It means opening up decision-making, governance, code, designs, contracts and data protection assessments to allow scrutiny from a diverse range of experts. ‘Making it open makes it better’ is a common principle in data security and open source software communities. It allows other experts to spot what's not working and ultimately make things better. The same should be true for policy making - especially in a crisis.

There’s been a lot of big changes to how data and technology is used in the NHS over the last few months. It's important to learn from what’s worked well and not so well in the crisis to shape what happens next.

In this moment of increased public interest, there’s an opportunity to embed trustworthy governance and decision-making in how NHS-held data is managed. But we have not got off to a good start in England and trust is fragile. Decisions made now will shape the role of data in providing care in the future. We need to make sure it works for everyone.